Since 2012, we at ShibataFenderTeam, delivered more than 80 sets of Cone Fenders, more than 60 sets of Double SPC Cone Fenders, over 200 Bollards as well as various Element Fenders, V Fenders, Extruded Fenders and other maritime safety equipment for our valued long-term partner Port of Stockholm for their port developments Värtahamnen, Kapellskär and Norvik. 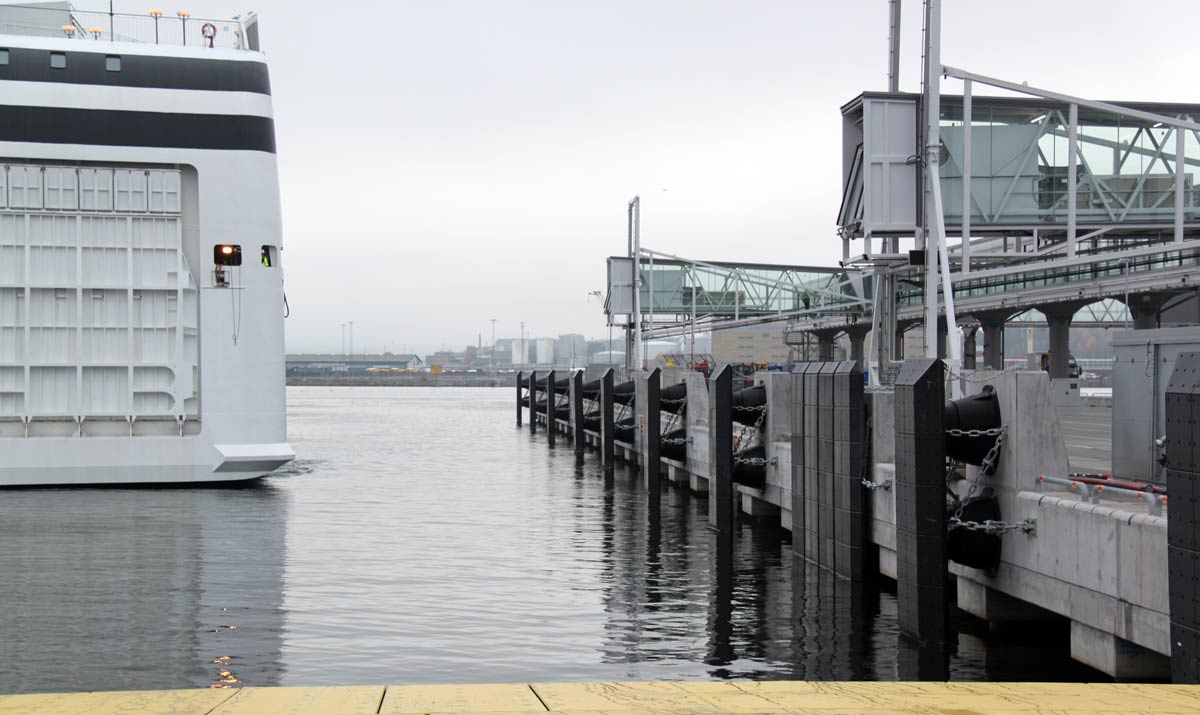 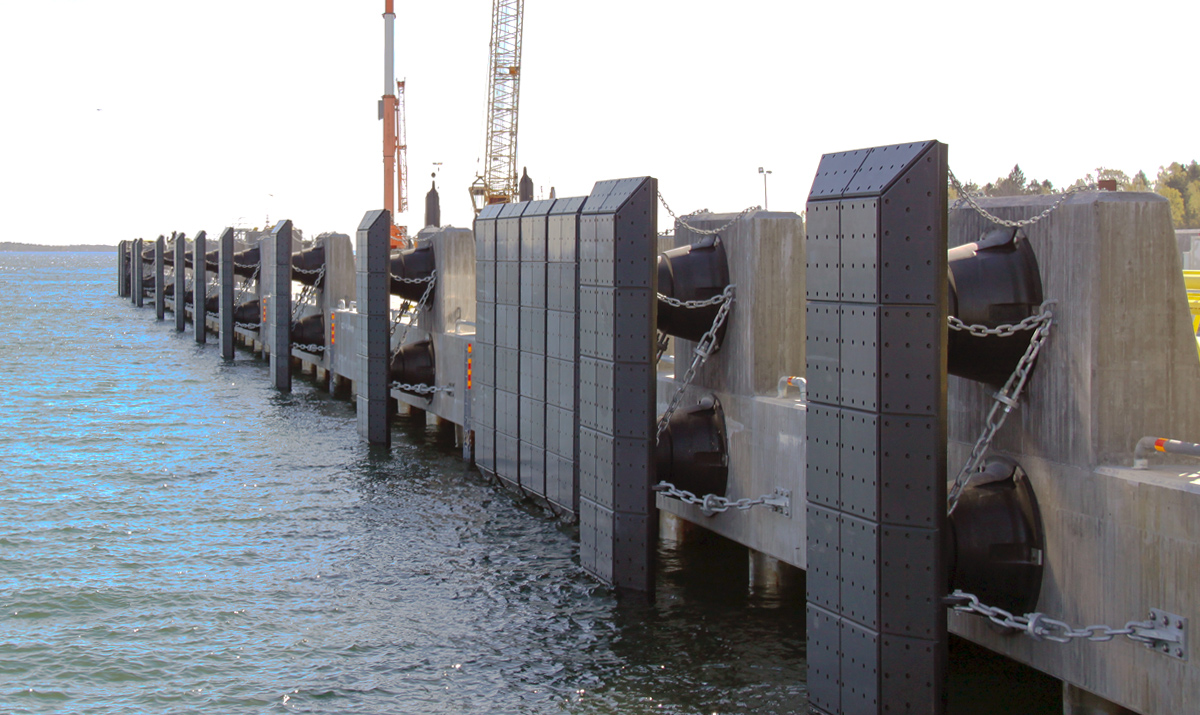 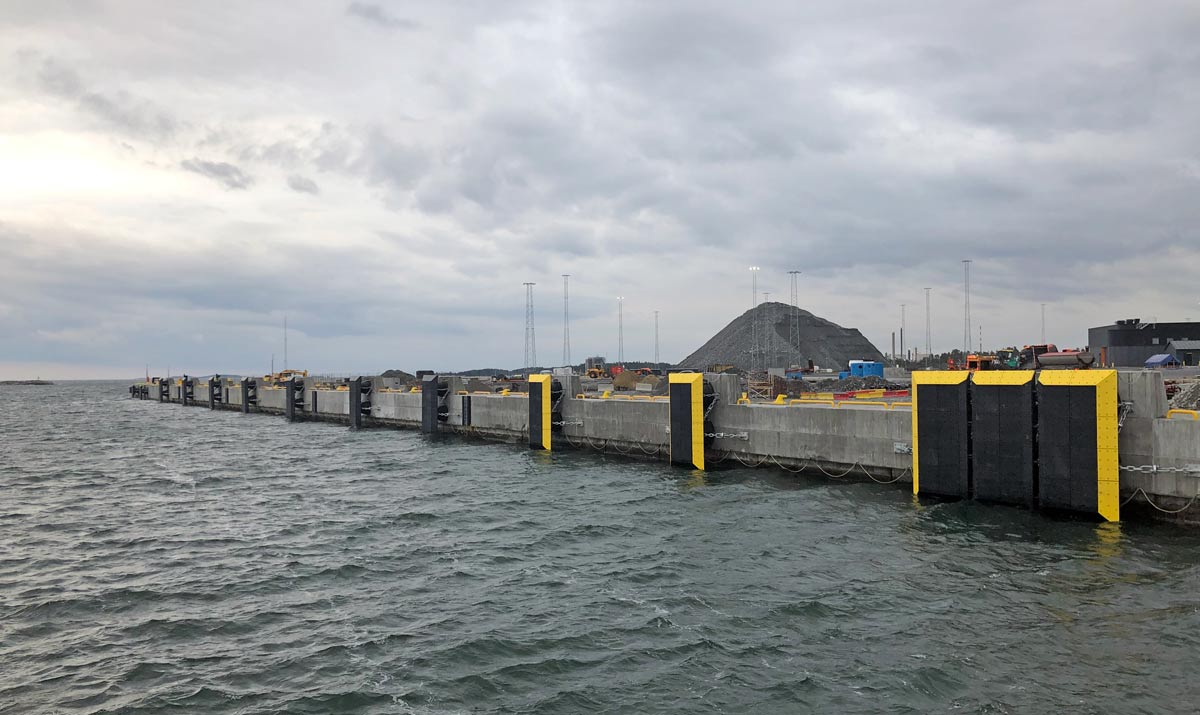 Värtahamnen Terminal
The infrastructure project at Värtahamnen is mainly designed to increase the passengers and cargo handling capacity. It leads to a more frequent ferry traffic over the Baltic Sea at the Värtahamnen Ferry and RoRo Terminal. From 2013 until 2016 five quay berths were refurbished and 1,200 meters of new quay were built in Värtahamnen. ShibataFenderTeam supplied 49 sets of SPC 1100 Cone Fender Systems, over 100 bollards and 5 Rotation Support Systems to the Värtahamnen Ferry and RoRo Terminal in 2012. See more pictures of this great project here.

Kapellskär Terminal
The eco-friendly port in Kapellskär was extended from three to five modern berths. The location of this terminal and the unique short approach time, make it possible to rapidly transport goods and passengers from Stockholm and the Stockholm surroundings, to the rest of Sweden, Finland, Norway, Russia, the Baltic States and Continental Europe. In 2015 and 2016, SFT delivered 5 sets of SPC Fender Systems, 23 sets of SPC Double Cone Fender Systems and two Rotation Support Systems to the Kapellskär Ferry Terminal. Check out our two references at Kapellskär here and here.

Stockholm Norvik Port
Stockholm Norvik, part of the Ports of Stockholm, is a brand-new RoRo and container port with the best possible location in the Baltic Sea. A hub that enables sustainable import and export of goods to and from all over Sweden with short entry, efficient transport links and a newly built railroad. SFT has equipped the Stockholm Norvik Port, operated by Hutchison Ports, with 32 sets of SPC Cone Fender Systems, 46 sets of Double Cone Fender Systems, 23 sets of Arch Fenders and over 100 Bollards, in 2018. Hutchison Port, one of the largest container operators, opened the new container terminal at Stockholms Hamnar in 2020. With 1,325 meters of berthing space the new port can handle 500,000 TEUs yearly. The safe and eco-efficient port, equipped with modern technology offers direct access to one of Europe’s fastest-growing regions. In March, the Stockholm Norvik Port was even honored with the renowned award "Årets Bygge" from the construction magazine Byggindustrin. More impressive photos of our Norvik references can be seen here and here.

We want to thank our partner Stockholm Hamnar for the trust in our expertise and the honor to be a part at building and creating a new infrastructure for the Ports of Stockholm. We look forward strengthen our close relationship and handle many interesting projects together.

More information about the three ports can be seen in this video made by the Port of Stockholm: Welcome to Ports of Stockholm!

Many great project can’t be honored in only one article, read also our other news articles about Port of Stockholm projects: